The History of Inca Civilization 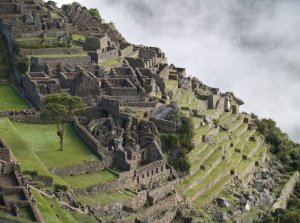 The Inca Civilization lasted for three hundred years from the 13th to the 16th century. Getting a true picture of Inca history is difficult because the Incas had no written language and passed their history down orally from one generation to the next.

What we know about the Incas has been pieced together from archaeological evidence and the oral history still present in Peru.

Tracing the history of the Incas is difficult because the Inca relied heavily on their people to carry important information. Since the Incas had no written language, history was passed down by oral historians.

Even the Inca mathematical system required special people to interpret it. The Incas used a system of knotted, colored string called quipu to keep track of livestock and other business. However these strings required special rememberers to interpret what the strings meant. This finance system of the Incas was quite advanced. Although you would not need a dedicated representative to understand the system, it was more than enough to handle and run business for the Incas. While quipu still exist today, their meaning died with the rememberers. 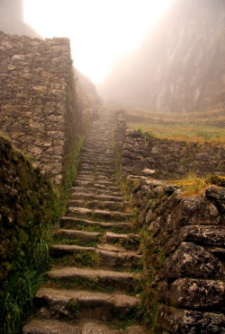 The Incas were a polytheistic people that believed in a variety of gods. Most of these gods were attached to natural objects such as the sun, the moon, and the earth.

In fact, the Incas believed that their Emperors were descended from the sun god Inti. This gave Inca Emperors the same kind of demigod status that the Egyptian Pharaons had.

In general, Inca art was plain. They valued functionality over aesthetics and most of their sculpture had ceremonial purposes. Their architecture was precise and Spartan.

The Incas did, however, create very elaborate, brightly colored tapestries made from alpaca. But even these ornate Inca tapestries had the practical purpose of binding political contracts.

The greatest achievement of Inca civilization was the architecture.

The Inca built their buildings by placing stones together in such a tight fashion that not even a thin knife blade could fit between them.

This method of building required no mortar and was extremely resistant to seismic activity. As a result, sites like Machu Picchu remain largely intact.

Today building the pyramids would be an insanely difficult project.

The Rise and Fall of the Inca Empire

For the first 200 years the Inca were a small group of people; however around 1438 the Emperor Pachacutec’s aggressive military expansion turned the Inca civilization into the most powerful nation in South America. Pachacutec’s rule is generally accepted to be the starting point of the Inca Empire that would reign for the next two generations.

After the death of Pachacutec’s successor, the Inca Empire was split into two factions, each led by one of the Emperor’s sons. The division eventually led to a civil war that wouldn’t be resolved until 1532; the same year the Spanish conquistadors arrived. Unfortunately a lot of Inca art would be lost during the Spanish rule.

In their quest for gold and silver, the conquistadors would melt down countless examples of Inca metalwork. While some aspects of Inca civilization would remain after the Spanish conquest, most of it would pass into myth.