The Nazca lines in Peru were made many centuries before the rise of the Inca empire and they are one of the most important legacies of ancient pre-Inca Peruvian culture. Basically they are are geoglyphs and geometric line clearings in the Peruvian desert.

The German scientist Von Däniken, in his book “The Response of the Gods”, claims the lines were treated as signals and landing strips for alien spacecraft. But it is Maria Reiche, a German immigrant who defined them as the strange testimony and legacy of the ancient Peruvian cultures: 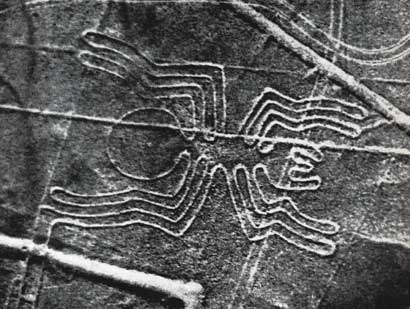 “The Nazca lines in Peru are nothing less than a documented history of science and scientists of the pre-Columbian Peru. A scientific tradition in which the ancient Peruvians developed an alphabet to record the most important astronomical events of those days. The Nazca lines are the pages of a book written with this strange alphabet.”

You can see figures such as big giant spiders, lizards, llamas, monkeys, dogs, hummingbirds, etc., not to mention the zigzagging and geometric designs. There are a lot of unanswered questions regarding the lines such as how they remain intact after hundreds of years or even why they embarked in such a big project.

In 1927, archaeologist Mejia Xespe-disciple of Julio C. Tello, the Father of the Peruvian-Archeology was informed about the presence of some mysterious geoglyphs or lines on the ground in the Peruvian coast but at that time it wasn´t given much importance. They were more attracted to other archaeological sites like the majestic Machu Picchu in Cuzco and the fascinating cultures of Chavin and Chan Chan among others.

The same year, 1927, another researcher arrived to Peru, Dr. Paul Kosok, he was very attracted to these cultural pre-Columbian expressions. In one of his first trips to the south of the country, he stopped at the top of a plateau and saw extensive lines on both sides of the road near the mountains. After some onsite research, he was amazed to find that one of the figures had the unmistakable shape of a bird flying.

In 1946, Kosok returned to his country but not before suggesting to Maria Reiche, who had assisted him on the investigations, to continue studying the Nazca line drawings that he had begun to decode. María devoted her life to this work.

Maria Reiche, studied the Nazca line drawings for 50 years. She explained how these lines were used by ancient peruvian astronomers as if they were a gigantic solar and lunar calendar, nestled in the sand, legends and myths of the locals.

The Nazca Lines in Peru
A cultural catalog in the peruvian desert
The Monkey, Nazca Lines. Photo taken by Maria Reiche

Some of the animal designs that are perceived in Nazca are a whale, a dog with long legs and tail, two llamas, various birds such as herons, the crane, the pelican, the gull, the famous hummingbird and the parrot. In the category of reptiles, there is an alligator, an iguana and a snake.

How to Get to Nazca?

If you plan to visit the Nazca Lines, you must take a bus from Lima because there are no flights between both cities. The distance is 475 Km and the bus will take you in approximately 5.5 to 6 hours. You can stay in the city of Nazca or Ica and get to know beautiful places in the area like Chincha or Paracas.

How much does it cost to fly over the lines?

The Nazca Lines in Peru are an incredible place where artists drew pictures in the sand; pictures that they themselves couldnt appreciate, because you need to be flying to do so.

If you are up to sitting down in a little Cesna for about 40 minutes ride and look down on a spider, a monkey, a dog, an astronaut a whale among many other and witness this ancient place, it will only cost you around 45 US dollars. Try to avoid eating before the flight otherwise you could feel sick. While you may think it would be a good idea to walk among the lines, you should avoid doing this. Damaging or vandalizing the lines would be considered a criminal activity. Even if done by accident it would be best to not walk through them. A Los Angeles criminal defense attorney may be able to assist you with any type of criminal case you are faced with.