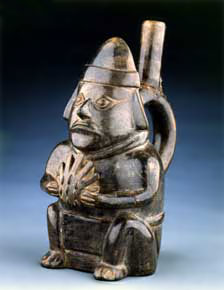 The Chimu culture was established on the northern coast of Peru, 1100 to 1400 AD. The centre of this culture was the city of Chan Chan. The ruins of the city cover almost an area of 20 square km.

The Chimu were an expansionist centralized state with clear divisions of class and a very complex bureaucracy. The economic and social system operated through a network of rural towns and the state was administered in the capital Chan-Chan. 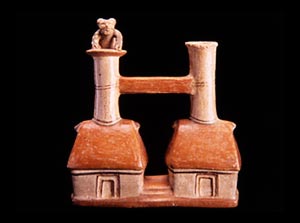 The Chimu ceramics fulfilled both functions, for daily use or household and for ceremonial offerings. Chimu artisans worked in metal workshops divided into sections for each of the specialized treatment of metals. 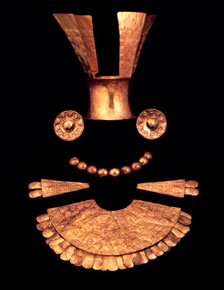 With all these techniques, the Chimu produced a large quantity of objects such as cups, knives, containers, bracelets, pins, crowns, etc. Textiles were adorned with feathers and plates of gold and silver colors that were taken from certain plants . 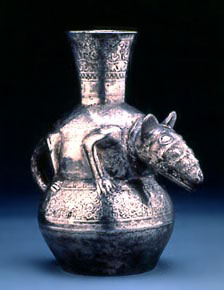 The garments were made of four animals, the guanaco, the llama, alpaca and vicuña and from a native cotton plant that grows in a natural way in seven different colors. The clothing consisted of loincloths, sleeveless shirts with or without fringes, small ponchos, tunics, etc.