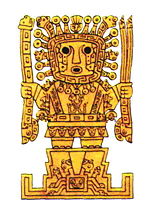 The Inca Religion allowed conquered cultures to incorporate their own religion and beliefs. The Incas were a polytheistic people with a rich mythology. While they left no written record of their religion, they did leave an oral record of their beliefs that has been passed down from generation to generation through the centuries.

Viracocha is the name of the Inca god of creation. All things and all other gods came from Viracocha. The legend is that he rose out of Lake Titicaca after the Great Flood that destroyed all life.

Viracocha made the Inca out of the clay of the earth and the rocks in the mountains. He also created the sun god Inti who fathered Manco Capac, the first Inca Emperor and Mamaquilla (the Moon Goddess) linked to the account of time and timing, the first female deity .

There are many gods in the Inca pantheon. The Inca’s worship of nature demanded that almost all natural phenomenons had a god associated with it. In addition, they also practiced ancestor worship. However, the sun god Inti was considered to be the most important god at the time. 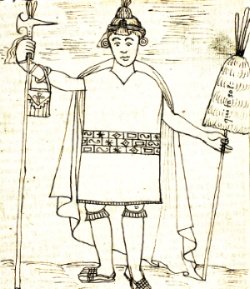 Because Inti gave the Inca warmth and light, he was often referred to as The Giver of Life. If you ever happen upon an Inca temple, chances are it belongs to Inti.

In addition, many worshipped supernatural powers, which are identified by objects or places. They were called huacas and are scattered throughout the inca empire.

Many people associate societies such as the Mayans, Aztecs, and Inca with human sacrifice. While these societies did practice it (some more than others), it was relatively rare in Inca culture.

Inca religion was rich with nature worship and festivals. In fact, festivals were held every month. With so many deities, it was only natural that divination was an important part of Inca religion. The Inca felt it was necessary to find out what the gods wanted in order to appease them.

Even today tourists can see the festival of Inti Raymi near the Inca capital Cusco on June 24th every year. This festival marked the winter solstice for the Inca.