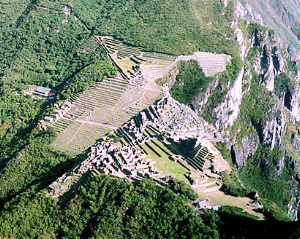 Huayna Picchu or Wayna Picchu is one of the famous mountain images in the world. With a height of 2667 meters above sea level, it beautifully raises over Machu Picchu. The Urubamba river bends around it and the Incas built a trail up the side of the mountain as well as temples and terraces on its top.

One path start at the north end of Machu Picchu, the road to the summit is made of narrow and steep roads, stairs carved into the rock right next to the mountain side walls and at the top, some small buildings and a large carved stone with a throne shape known as “seat of the Inca”. 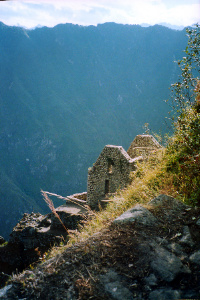 Its construction had to be arduous and dangerous. Some parts are slippery and steel cables provide support, you should wear appropiate footwear.

The most interesting thing here is the view of the Lost City of the Incas and the Urubamba river to the bottom of the Canyon, you can even hear its turbulent waters from such a high altitude.

The Temple of the Moon

From the summit, a second trail leads down to several caves and the misnamed Temple of the Moon, located in the northern side of the mountain. The name “Temple of the Moon” has no archaeological support, in any case, it reveals a common interest in quality by comparing it with other Inca monuments. Some of this caves have been lined with blocks of fine stonework carved to fit precisely with the irregular contourn of large rock outcrops that will serve as a roof. 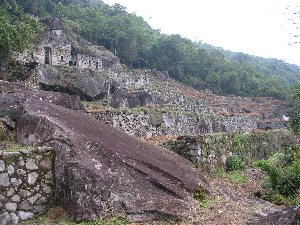 The caves are at a lower altitude than the starting point of the trail. The return path from the caves rounds up a loop around the mountain as it rejoins the main trail. The hike from the summit to the caves and back to the checkpoint takes about 2 more hours.

If you want to hike the Huayna Picchu trail, go no later than 9 am to be sure to get in. Be aware that during the rainy season tours are closed.