San Isidro Peru is one of the 43 districts of the Capital Lima, it has a huge amount of green areas. The Olivar Park has several olive trees planted for more than four centuries and was declared a National Monument in 1959.

San Isidro is a major financial quarter, you can see that many banks and businesses have set up their offices in modern building blocks.

There are more than 30 embassies, 20 banks, 15 Catholic Churches, synagogues and temples of other religions in San Isidro, you can tell is a nice area. There are important sites and social clubs such as the Lima Golf Club and Real Club de Lima, among others. San Isidro Peru is one of the most modern and beautiful Lima Districts.

San Isidro, in addition to financial and commercial center of Lima, has a great cultural activity, with several theaters, art galleries, libraries and houses of culture. 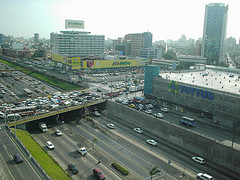 During colonial times, the region was awarded to Mr NicolĂˇs de Rivera, ‘El Mozo’, founder of the City of Kings. In 1560, Don Antonio de Rivera, Attorney General, brought the first olive trees that gave rise to the ‘Bosque del Olivar’ Park. In 1920, the development project started.

It was the sculptor Manuel Piqueras CotolĂ­, who wanted to achieve a quaint neighborhood and certainly some unity of architectural appearance and character.

Currently, San Isidro has become one of the strongest districts, but despite that characterizes modernity, still important legacies of the colonial and indigenous culture, combined with the finest architectural designs, make it one of the most beautiful, traditional and historic districts of Lima.

San Isidro Peru is a district that currently unites tradition, modernity and progress. Its large urban residential development, multifamily buildings, shopping – financial centers and architecture give a special personality and feel to the city.

The most valuable asset of San Isidro is ‘El Olivar Park’, it stands out among the parks of the city and is a living memory of the history of Lima. El Olivar was declared a National Monument by Supreme Resolution in December 16, 1959. This beautiful place is the most representative of San Isidro.

Moreyra house is a beutiful residence of San Isidro and is equipped with a majestic chapel, a basement and some catacombs. It was built during colonial times about 300 years ago, today, the residence is used, with much of its original furniture, as a large restaurant and tourist attraction. While touring the residence, reviews of the home can show it’s beauty. Home advisor reviews could upgrade the home but it is just as beautiful in its unchanged state.

City Tour Lima
Lima will impress you with its Pre-Inca pyramids surrounding the city, beautiful beaches, good museums, an active nightlife, fun bars, great restaurants, and the charisma of its people.

Callao Peru
Callao Peru is regarded by many people as a seaside suburb of Lima, in fact, it is certainly a city but can not avoid being overshadowed by its proximity to the capital of Peru, Lima.

The Capital of Peru
Founded by Francisco Pizarro in 1535, the capital of Peru, Lima, lies along the banks of the Rimac River. Overlooking the Pacific Ocean, this “city of Kings” has rapidly transformed into a cosmopolitan melting pot, rich with a variety of cultures while maintaining its Peruvian heritage.

Lima Weather
Weather in Lima is very mild, there is very little rainfall throughout the year. Some people in the Peru Capital, never used an umbrella in their lives.

Lima Peru Hotels
Lima Peru hotels satisfy any exquisite taste and any high demand, it is highly reccommended to make a research before booking.

Miraflores
Miraflores Lima Peru is now a thriving district, safe and very important in Lima, for their great commercial movement, culture and tourism.

San Isidro
San Isidro Peru is one of the most beautiful, traditional and historic districts of Lima., it has a huge amount of green areas. The Olivar Park has several olive trees planted for more than four centuries and was declared a National Monument in 1959.

Barranco Lima
Barranco Peru is a pleasing Lima suburb whose character remains, where the city has lost much of its own. It’s the heart of the bohemian section of the city. Sitting on the sea, it feels like a small, separate town.